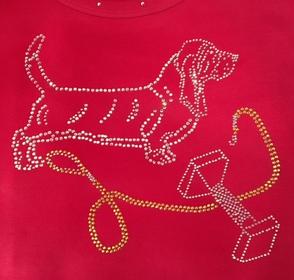 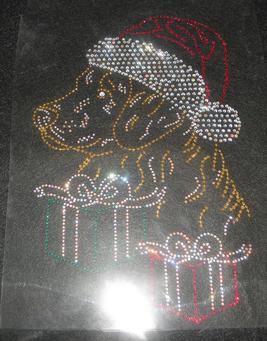 Hello!  My name is Kelly and I purchased the business

from the former owner in June of 2017.  I was lucky enough to have met her at a dog show in Kalamazoo, MI.  She was wonderful to work with and learn from.

I have been married for 28 years this year and have 4 gorgeous kids to brag on.  My oldest daughter was born two years after we were married, followed 13 months later by a set of twin boys, who were followed 3 years later by my youngest daughter!  I'm not quite sure how we did it, but we managed to survive with so many kids within such a short time! LOL!

I come by loving SPARKLY clothing honestly!  Both of my girls have been riding horses since they were 9 and 5 years old.  And I have been blinging clothes for them just as long.  My boys aren't a fan of horses as much as they are fans of horsepower so I never had to bling anything for them, but I am proud to say that their favorite color is CHROME!

Since I purchased the business in the middle of the year I already had commitments through the end of 2017 with my oldest daughter, as she was Miss Rodeo Missouri 2017.  She was obligated to appear in Las Vegas in December for the Miss Rodeo America Pageant and fulfill her contract with our state's program.

Melanie and I agreed that I would start training with her in September and come to Florida for the AKC National Championship so I could see first hand how CRAZY it can be. I was exhausted every day but just thought I was burning the candle at both ends and I would catch up on my sleep, someday.  I worked side by side with her from the second week of September through the week of Thanksgiving.  I left 2 days after Thanksgiving and drove a 4 horse goose-neck trailer filled to the brim with Swarovski Crystal covered clothing so that she had 3 outfits a day...FOR 10 DAYS!!! And boots and hats to match! We didn't even take a horse!!  So after a whirlwind 14 days in Vegas my husband drove the trailer home and I caught a flight to Orlando to join Melanie and the dog show in progress.  WOW!  I was exhausted before I ever even got started. I was there from Thursday to Sunday and then flew home Monday. I slept for days, until my husband woke me up so that I didn't sleep through Christmas!!

It seems my exhaustion wasn't just the regular old kind of tired. After a series of tests